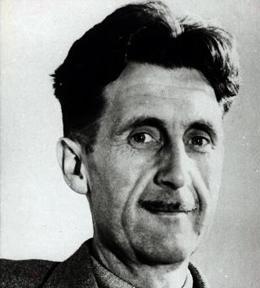 The British author George Orwell, pen name of Eric Arthur Blair, b. Motihari, India, June 25, 1903, d. London, Jan. 21, 1950, achieved prominence in the late 1940s as the author of two brilliant satires attacking totalitarianism-Animal Farm and Nineteen Eighty-Four. Familiarity with the novels, documentaries, essays, and criticism he wrote during the 1930s and later has since established him as one of the most important and influential voices of the century.

Orwell's parents were members of the Indian Civil Service, and, after an education at Eton College in England, Orwell joined (1922) the Indian Imperial Police in Burma, an experience that later found expression in the novel Burmese Days (1934). His first book, Down and Out in Paris and London (1933), was a non-fictional account-moving and comic at the same time-of several years of self-imposed poverty he had experienced after leaving Burma. He published three other novels in the 1930s: A Clergyman's Daughter (1935), Keep the Aspidistra Flying (1936), and Coming Up for Air (1939). His major works of the period were two documentaries: The Road to Wigan Pier (1937), a detailed, sympathetic, and yet objective study of the lives of nearly impoverished miners in the Lancashire town of Wigan; and Homage to Catalonia (1938), which recounts his experiences fighting for the Loyalists in the Spanish Civil War. Orwell was wounded, and, when the Communists attempted to eliminate their allies on the far left, fought against them and was forced to flee for his life.

Orwell's two best-known books reflect his lifelong distrust of autocratic government, whether of the left or right: Animal Farm (1945), a modern beast-fable attacking Stalinism, and Nineteen Eighty-Four (1949), a dystopian novel setting forth his fears of an intrusively bureaucratized state of the future. the pair of novels brought him his first fame and almost his only remuneration as a writer. His wartime work for the BBC (published in the collections George Orwell: the Lost Writings, and The War Commentaries) gave him a solid taste of bureaucratic hypocrisy and may have provided the inspiration for his invention of “newspeak,” the truth-denying language of Big Brother's rule in Nineteen Eighty-Four.

Orwell's reputation rests not only on his political shrewdness and his sharp satires but also on his marvellously clear style and on his superb essays, which rank with the best ever written. “Politics and the English Language“ (1950), which links authoritarianism with linguistic decay, has been widely influential. the four-volume Collected Essays, Journalism, and Letters of George Orwell was published in 1968.